Finally, Las Vegas got a Dunkin Donut shop. The last time I ate some was when my sister visited like last year from Kansas. Imagine that our Dunkin Donut is much closer. 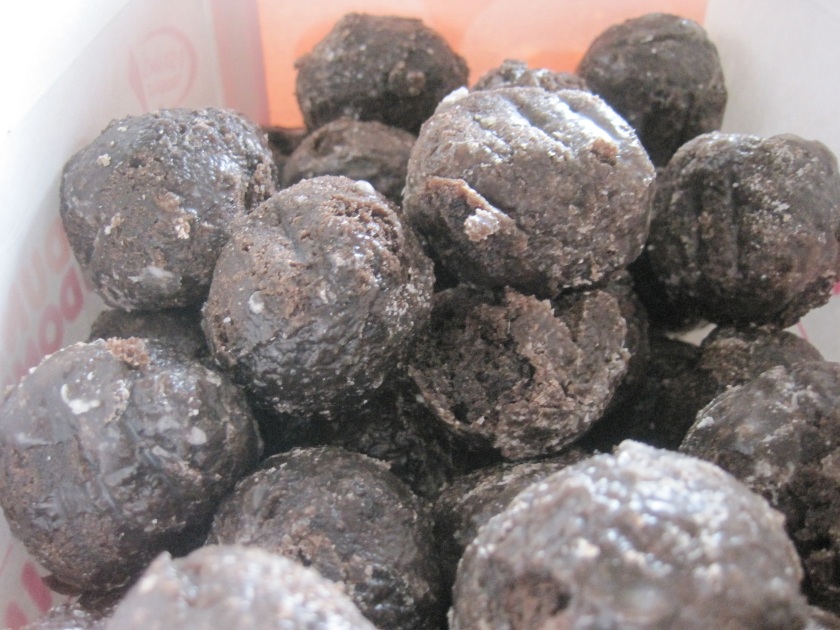 Cleaning out the closets, reorganizing the pantry, throwing out old clothes, and dusting behind appliances are tasks that are probably already on your spring cleaning checklist. A deep cleaning of your home or apartment is a great way to kick off a new season and get rid of clutter. Your home will not only look beautiful, but it will be easier to find what you need on any given day and you can make the most of your living space!

It’s easy to overlook many areas of the home during your cleaning rounds, so make sure you have a thorough list or plan before you begin. Here are ten things you don’t want to forget during your spring cleaning routine:

#1: Cleaning underneath the kitchen countertops. Germs, dirt and mold can collect right under the ridge of your countertops. Clean under the counter space with a washcloth and disinfectant.

#2: Disinfecting and cleaning around the toilet bowl. Even though you might clean the inside and top of the toilet bowl once or twice per week, the area right under the flush tank often gets overlooked.

#3: Dusting the blinds. If you have Venetian or wood blinds hanging in your living space, take the time to dust each slat and also fix any broken strings.

#4: Reorganizing the medicine cabinet. Throw out expired products and remove everything from the shelves for a thorough clean. Only keep what you and your family use on a regular basis.

#5: Vacuuming or sweeping underneath the bed. Dust bunnies tend to migrate underneath the bed frames each season, so make sure you move the bed to another side of a room to catch them. Avoid storing anything but sealed containers and boxes under your bed to keep things organized.

#6: Dusting art, photographs, and wall Carefully remove photographs, artwork and wall hangings from the wall to give them a light dusting before putting them back in place.

#7: Reorganizing and cleaning under the kitchen sink. If you tend to store a lot of cleaning supplies and other household items in the cupboard underneath the kitchen sink, clear everything out and wash inside to get rid of mold and debris.

#8: Dusting the tops of ceiling fans. Dust down all the fan blades and use a gentle cleanser to keep those blades shiny and looking new.

#9: Cleaning the bathroom fans. If you have a fan in the bathroom with a visible vent, dust and clean it thoroughly to ensure air is flowing in and out properly. Dust and grime can collect on the vent plate and inside the vent over time.

#10: Cleaning the washer and dryer. Run your washer through a cycle of only vinegar and baking soda with a little water to clean for a deep clean. Clean out the dryer’s vents and wipe down both units with a damp cloth dipped in white vinegar and lemon juice or baking soda. Be sure to vacuum and sweep around each unit thoroughly.

As some of you already know me… I love to clean and organized things. I love a clean, organize, good smelling house.

What You’re Really SwallowingIn most restaurants, after 8 p.m. or so, all the coffee is decaf because no one wants to clean two different coffeepots. I’ll bring out a tray with 12 coffees on it and give some to the customers who ordered regular, others to the ones who ordered decaf. But they’re all decaf. —Charity Ohlund
What You Don’t Want to KnowWe put sugar in our kids’ meals so kids will like them more. Seriously. We even put extra sugar in the dough for the kids’ pizzas.—Waitress at a well-known pizza chain
What We Lie AboutIf you’re a vegetarian and you ask if we use vegetable stock, I’m going to say yes, even if we don’t. You’ll never know the difference.
What You Don’t Want to KnowAt a lot of restaurants, the special is whatever they need to sell before it goes bad. Especially watch out for the soup of the day. If it contains fish or if it’s some kind of “gumbo,” it’s probably the stuff they’re trying to get rid of. —Kathy Kniss, who waited tables for ten years in Los Angeles
What You Don’t Want to KnowNow that I’ve worked in a restaurant, I never ask for lemon in a drink. Everybody touches them. Nobody washes them. We just peel the stickers off, cut them up, and throw them in your iced tea.—Charity Ohlund, Kansas City waitress
What You Don’t Want to KnowIf you ask me how many calories are in a particular dish, I’m not allowed to tell you even if I know. I’m supposed to say, “All that information is available online.”—Waitress at a well-known pizza chain
What You Don’t Want to KnowI’ve never seen anybody do anything to your food, but I have seen servers mess with your credit card. If a server doesn’t like you, he might try to embarrass you in front of your business associate or date by bringing your credit card back and saying, “Do you have another card? This one didn’t go through.”—Charity Ohlund
What You’re Really SwallowingSkim milk is almost never skim milk. Very few restaurants outside Starbucks carry whole milk, 2 percent milk, skim milk, and half-and-half; it’s just not practical.—Chris
What You’re Really SwallowingSome places buy salad dressings in one-gallon jars, then add a few ingredients, like a blue cheese crumble or fresh herbs, and call it homemade on the menu. —Former waiter Jake Blanton, who spent ten years in restaurants in Virginia, North Carolina, and California
What Drives Us CrazyThe single greatest way to get your waiter to hate you? Ask for hot tea. For some reason, an industry that’s managed to streamline everything else hasn’t been able to streamline that. You’ve got to get a pot, boil the water, get the lemons, get the honey, bring a cup and spoon. It’s a lot of work for little reward.—Christopher Fehlinger, maître d’ at a popular New York City restauran
What We Want You to Know
In many restaurants, the tips are pooled, so if you have a bad experience with the server, you’re stiffing the bartender who made your drinks, the water boy who poured your water, sometimes the hostess, the food runners, and maybe the other waiters.—Christopher Fehlinger
What We Want You to KnowEven at the best breakfast buffet in the world, 99 times out of 100, the big pan of scrambled eggs is made from a powder. —Jake Blanton
What We Want You to KnowPeople think that just because your food took a long time, it’s the server’s fault. Nine times out of ten, it’s the kitchen. Or it’s the fact that you ordered a well-done burger.—Judi Santana
What We Want You to KnowWhen you’re with the woman who’s not your wife, you’re a lot nicer to us, probably because you know that we know it’s not your wife. —Caroline Radaj, waitress at a members-only club outside Milwaukee
How to Be a Good CustomerIt’s much easier to be recognized as a regular on Mondays, Tuesdays, or Wednesdays. Once you’re recognized as a regular, good things start to happen. You’ll find your wineglass gets filled without being put on your bill, or the chef might bring you a sample.—Christopher Fehlinger
How to Be a Good CustomerAvoid Mother’s Day and Valentine’s Day like the black plague. It’s crazy busy, so they’re not going to be able to pay as much attention to quality. Plus, they bring out a special menu where everything is overpriced.—Steve Dublanica
How to Be a Good CustomerIf the restaurant is busy and your child is shy, please order for him. Kids can sit there forever trying to decide, or they whisper and you can’t hear them. Meanwhile, the people at the next table are yelling at you to come over.—Derek Dudley, a waiter at a casual pizza restaurant in Phoenix
What You Need to Know About TippingThe best tippers tend to be middle-class or people who have worked for everything they have, not the really wealthy or the kid who inherited the trust fund. Which is not to say that we mind if you use coupons. But when you do, tip on the amount the bill would have been without them.—Judi Santana
What You Need to Know About TippingFirst dates, especially blind Internet dates, are great for tips. You know he’ll probably order a bottle of wine and leave a 20 to 25 percent tip because he’s showing off. —Jeremy Burton, waiter at a grill in southwest Michigan
What Else We’d Like You to KnowDon’t order fish on Sunday or Monday. The fish deliveries are usually twice a week, so Tuesday through Friday are great days. Or ask the restaurant when they get theirs.—Steve Dublanica

Now made me think twice on what to order if we go out. Other than that we are one good customers tha get notice and waitress/waiter are thankful that we are dining in…. 😀

The lemon I must forget about them and never asked or if I do at keast wipe them first.

Organization Everywhere
There are so many items that can get overlooked as valuable organizers. Just remember, if it used to hold something, chances are it can be put to use again.

Pocket Shoe Organizers: Not just for shoes, these handy, over-the-door organizers are perfect for more than just the bedroom closet.

Cardboard six-pack holder: Once your six-pack holder is done keeping your soda safe, it can make another useful stop on the way to recycling. Start by covering it with decorative paper, shelf liner or wallpaper to add reinforcement and give it a new and improved look.

Paint or Coffee Can Cubbies:Unused silver paint cans are easy to find at home improvement stores for a small cost or you can easily clean out used coffee cans with Dawn®dish liquid. Recover or paint your cans for a brand new look and add decorative labels or chalkboard paint so you always know what’s inside.

Before you run out to the store to pick up boxes, bins or containers, look around your own home for ideas—you just may find the organization solution you need.

HGTV’s Frank Fontana shares his five design tips for reenergizing yourself and your home to help foster financial success.

With the beginning of a new year comes the hopes and dreams of a fresh start for many people. However, it’s no secret the world is offering unbelievable challenges for many Americans.

Many of us are feeling like we are losing our senses of control, our jobs and balance in our homes—and with good reason. Yet the reality is that we can’t control the stock market or the myriad of other financial challenges we face every day. What we can control is how we live and function in our own homes. We can control our personal environments.

So, take a good look around your home. Believe it or not, your house, apartment and home office could be making you poor! At the very least, they can be contributing to a poor attitude and outlook on life, which can be carried out your door, often to the office, school, church and into the world.

That’s why I am happy to say that this is one area of your life in which you can have total control, no matter what your budget or current living situation. Here’s how.

Remember: If you make S.E.N.S.E., you make money! I wish you all a stylish and prosperous year.